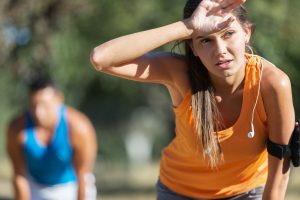 We all know that the more you workout, the more you sweat. It’s a simple equation. The energy put into something produces a product. Working out leads to sweat. Following that same equation, your sweat also produces something: odor-causing bacteria. In particular, athletes involved in sports produce sweat on a normal basis, and typically in clothing that is used and reused.

Sports Odors can be classified as sweat and body odors that are transferred onto your clothing during physical activities such as working out, playing sports, or doing outdoor work on a hot or humid day. No matter which activity that you are performing the results will be the same, a hot and stinky mess to clean up after. Do you have challenges in removing sweat odors from your clothes or are you struggling to remove body odors from your workout clothes or yoga pants? If so, you are in luck as we will go over what you need to get rid of sweat smell from your clothes & linens.

Why Does Sweat Smell?

Sweat is a necessary function of our bodies that rids us of harmful toxins that build up. The exocrine system, in which our sweat glands operate, is needed to prevent dangerous quantities of toxic chemicals and compounds from being stored in our tissue and bloodstream. When we sweat, our bodies give off an unpleasant odor, usually referred to as body odor. Sweat itself has no smell. Rather, it is the bacteria from our skin breaking down the molecules from our sweat that creates the smell.When we exercise, we sweat. The sweat that we associate most with body odor comes from the apocrine gland, located in the armpits. That gland, part of our endocrine system, releases sweat that is thicker and therefore takes more work to break down, so bacteria works harder to break it down and creates the offensive smell. Because this gland is in the armpit, where the skin is not entirely exposed to ventilation, the bacteria, as well as the sweat, lingers. In other areas of the body sweat, for the most part, evaporates right away before bacteria has a chance to break down and cause the odor.

Sweat smells bad no matter what when it begins to be broken down by bacteria, but certain things make it smell even worse. The following are ten things that can cause extra foul-smelling sweat:

As mentioned before, the smell of sweat is actually caused by the process of bacteria it down than the sweat itself. When that sweat contains certain toxins or compounds from foods, however, when it is broken down those are released back into the air, causing an odor.

The Worst Fabrics to Sweat In

If you are prone to sweating a lot or you are spending time exercising in warm weather, natural fabrics such as cotton are best for both moisture and odor control. They are better able to absorb any moisture from the sweat and are quicker to allow that moisture to evaporate. Although certain fabrics may tout benefits such as being wrinkle free or sweat resistant, it’s those materials that actually make your sweat smell worse, and cause you to be uncomfortable as the sweat is trapped inside your clothing. The worse clothing materials for sweat are those that are synthetically made and that trap moisture. Rayon, nylon, silk, and polyester all retain sweat in your clothes and repel water, making it difficult for sweat to escape and therefore building up even stronger odors.

Not only can these materials cause your sweat to smell more offensive, but some of them may even lead to adverse health effects when sweated in. If you’ve ever worn a new shirt or pair of jeans and noticed after sweating in them that some of the dye came off and stained your skin, you’ve witnessed how some toxins from our clothes can enter the body. A lot of clothing is made with materials that have chemicals added either directly to the fabric or as a coating on top of the base material that is meant to increase ease of care. Those chemicals, however, can be absorbed through our skin, even more so when we sweat. When we perspire, our pores open up, opening the door for dangerous chemicals to seep in. Fabrics like acrylic, no-shrink wool, and nylon contain some known carcinogens and other toxins.

Whether you are working out or going to work, be wary of the fabrics you are choosing for your wardrobe. Wearing the wrong fabrics can both make you smell worse, and can cause negative effects on your health in the long term. Stick to natural fibers light in color to avoid both of these negative consequences of excessive sweat.

Traditional detergent isn’t designed to remove those tough odors such as sweat and body odors but rather mask them with fragrances and perfumes. At times Customers are misled into thinking that the odors are gone from their clothing after their first wash, only to find out later that the odors have reappeared and are even smellier than before.

You may have notice sports detergents that claim to be able to remove sweat and body odors by using enzymes in their detergents. If you are not familiar with that terminology, an enzyme is a protein which is placed in an odor eliminator product to help aid or speed up chemical reactions.

Enzymes are safe as they are nearly present in all living thing. A quick but simple explanation of how it should work is that the proteins in the enzyme are sent off to “eat” away at the bacteria and in a perfect world when all done the odor should be completely removed. The problem is that for the enzyme to be effective it must be the correct enzyme for that odor and must be used under ideal to nearly perfect conditions to work. Think of it regarding a lock which has its unique key which is used to open and close it, if you do not have that correct key for that lock it will not allow you to open and close it.

When you work out or move around in the heat or sun, your body produces sweat. Sweating is the body’s way of regulating temperature. When sweat meets the bacteria on the surface of your skin, it produces an odor. That smell is what we call body odor (or B.O. for short).

When you work out or move around in the heat or sun, your body produces sweat. Sweating is the body’s way of regulating temperature. When sweat meets the bacteria on the surface of your skin, it produces an odor. That smell is what we call body odor (or B.O. for short).first reported-http://www.webmd.com/skin-problems-and-treatments/preventing-body-odor

At OdorKlenz, we understand the specific odor-causing bacteria that is produced from playing sports. We’ve taken our expert knowledge of athletic apparel, and our understanding of odor was causing sweat and put it to good use. We’ve developed two laundry detergents that not only target odors at their source: they neutralize and eliminate odors from the source. Using our patented earth-mineral technology, we’ve developed the leading odor-neutralizing and removal detergent.

OdorKlenz has developed such a revolutionary product that we are willing to back it up with the ultimate cleaning industry guaranty: a 30-day money back guarantee.